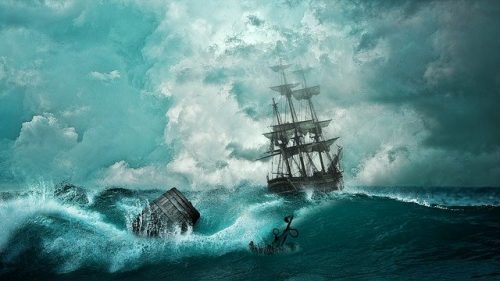 Jonah 1:1 Now the word of the LORD came unto Jonah the son of Amittai, saying,

2 Arise, go to Nineveh, that great city, and cry against it; for their wickedness is come up before me.

4 But the LORD sent out a great wind into the sea, and there was a mighty tempest in the sea, so that the ship was like to be broken.

5 Then the mariners were afraid, and cried every man unto his god, and cast forth the wares that were in the ship into the sea, to lighten it of them. But Jonah was gone down into the sides of the ship; and he lay, and was fast asleep.

Running from God will cost you something

Often times those that are running from God will do things or go places that will cost them. While this might be true that these cost might be spiritual, I believe in the context of this chapter that it is speaking of money. People that are trying to quiet down that still small voice will turn to those things that will cause then to spend and spend and spend. I have spoken to those who left church and turned to hobbies… and spent a fortune. I have spoken to those who turned from God and turned to alcohol and it cost them a fortune… Trying to run from God will make someone look for things that will satisfy the void and/or quiet the voice inside; that will be there when they try so hard to run from God.

God has a way of getting your attention

Vs. 4 – the LORD sent out a great wind into the sea

God will allow things to happen in your life to get your attention. If they can hear that still small voice that is speaking, then when these things take place… God is speaking. Car accidents, storms, political events can be tumultuous enough that God can use them to get someone’s attention.

It doesn’t matter if you are at peace about it, if it’s not the Will of God!

Vs. 5 – But Jonah was gone down into the sides of the ship; and he lay, and was fast asleep.

You might think things are ok… because you got your dream job, married your dream spouse, got that perfect house or nice car… Some might even think that God blessed in these things. But the storm is still raging. You are still running from God. God is still waiting.

When you think it’s just you and God, that your sin won’t hurt anyone… there is always collateral damage.

The mariners we afraid, they lost their cargo ($) It cost them money

Jonah 1:6 So the shipmaster came to him, and said unto him, What meanest thou, O sleeper? arise, call upon thy God, if so be that God will think upon us, that we perish not.

7 And they said every one to his fellow, Come, and let us cast lots, that we may know for whose cause this evil is upon us. So they cast lots, and the lot fell upon Jonah.

8 Then said they unto him, Tell us, we pray thee, for whose cause this evil is upon us; What is thine occupation? and whence comest thou? what is thy country? and of what people art thou?

9 And he said unto them, I am an Hebrew; and I fear the LORD, the God of heaven, which hath made the sea and the dry land.

10 Then were the men exceedingly afraid, and said unto him, Why hast thou done this? For the men knew that he fled from the presence of the LORD, because he had told them.

11 Then said they unto him, What shall we do unto thee, that the sea may be calm unto us? for the sea wrought, and was tempestuous.

12 And he said unto them, Take me up, and cast me forth into the sea; so shall the sea be calm unto you: for I know that for my sake this great tempest is upon you.

13 Nevertheless the men rowed hard to bring it to the land; but they could not: for the sea wrought, and was tempestuous against them.

14 Wherefore they cried unto the LORD, and said, We beseech thee, O LORD, we beseech thee, let us not perish for this man’s life, and lay not upon us innocent blood: for thou, O LORD, hast done as it pleased thee.

15 So they took up Jonah, and cast him forth into the sea: and the sea ceased from her raging.

16 Then the men feared the LORD exceedingly, and offered a sacrifice unto the LORD, and made vows.

17 Now the LORD had prepared a great fish to swallow up Jonah. And Jonah was in the belly of the fish three days and three nights.

One might feel that it was just a matter between them and God, but often running from God will have collateral damage. These sailors had a full load of goods that they were paid to ship, the costs of the vessel, crew, food and more were damaged or destroyed all because God’s man decided to run from God.

Further example: (When Peter got discouraged in John 20 and ran from God… he took half the disciples with him)

John 21:3  Simon Peter saith unto them, I go a fishing. They say unto him, We also go with thee. They went forth, and entered into a ship immediately; and that night they caught nothing.