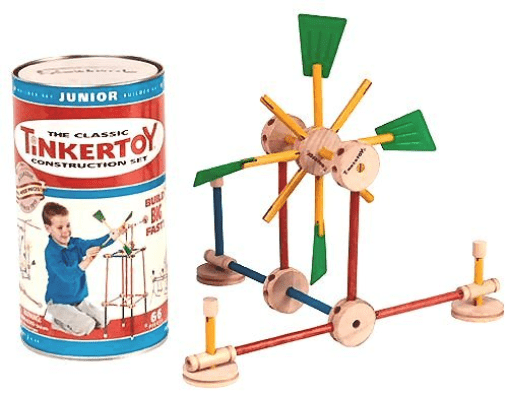 The year was 1979, Christmas morning, surely a time of peace and happiness. When the time came in the Brewer tradition to open the presents I got the hottest toy of the season… TinkerToys. With a smile on my face I began to assemble windmills, cars and skyscrapers until I ran into some tinker toy trouble; one of the wooden connectors was not drilled well and the cheap wooden sticks simply broke when I tried to push it in. Knowing that MY dad could “fix anything” I brought the tinker toy trouble to see if he could mend them for me… that is where tinker toy trouble created tinker toy terror.

Money was tight growing up, my parents sacrificed quite a lot to make sure we always had what we needed.. but Christmas for us was not about what we needed, it was about getting what you wanted. (at least to us) Dad always said you get what you need 363 days a year.. but twice a year you should try and get what you want. My parents worked hard to never let on that money was tight; this year especially was difficult for one reason or another. So when the request from their youngest son came to get the hottest, and expensive, toy of the season… they spent their last few dollars to make my Christmas special.

When I presented the broken parts to my dad he was very angry… like Christmas is over kinda angry. I, in no shortage of words, learned how much Christmas costs and the sacrifices that are made to make it happen. To “break” my toys was disrespecting what has been provided. While I didn’t break the tinker toys intentionally… the lesson was learned. The cost for my lesson was noteworthy because my other present was to go and see Star Trek the Motion Picture in the theaters later that day.. Didn’t get to see the movie until many years later when I bought a VCR in the 90’s (a bitter sweet viewing to say the least).

This attitude of respect, these many years later, is an integral part of my Christmas and my every day; as I try and teach my children the same. Taking care of the things that were given to us is a sign of respect and appreciation which… makes Christmas gift giving a very special gift… to the giver.