As this is Veterans Day, I thought I would bring some insight of someone who has been a soldier as to better understand how to be a soldier of Christ.

I served in the USAF during Desert Storm and the Bosnian Conflict. It was during this time that I worked with weapons that led to the nerve condition that deal with today.

However, for nearly 6 years I was someone who wore the uniform in the defense of this country. I also had the privilege to be in the Air Force Honor Guard and Rifle team under the 23rd TAW. It was this detail where I would play a role of honoring those who had died in the service of their country. I would employ the funeral services and pay last respects to the fallen and their family. 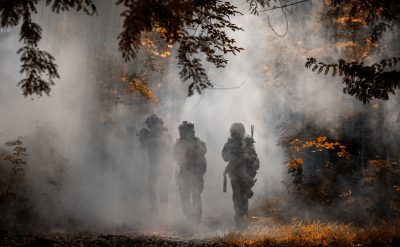 What is a soldier?

A soldier is person who: has set aside themselves, their comfort, their gain and their will to be a servant to a cause.

A good soldier must be a good servant

The meaning of G.I. = Government Issue

Colossians 3:22  Servants, obey in all things your masters according to the flesh; not with eyeservice, as menpleasers; but in singleness of heart, fearing God:

In basic training you had to learn to not be concerned with yourself but rather to obey those appointed over you.

A soldier knows how to endure hardness

2 Timothy 2:3  Thou therefore endure hardness, as a good soldier of Jesus Christ.

When you are a servant you are a tool. This tool is used by the master to accomplish a purpose. This may require doing things that are unpleasant, uncomfortable but never unreasonable.

2 Timothy 2:4  No man that warreth entangleth himself with the affairs of this life; that he may please him who hath chosen him to be a soldier.

When I was deployed, the Federal Government would retain my paycheck, pay my bills and send the rest to my wife.

A good soldier knows the tools of his mission

Weapons, armament, communications, tactics & policies may be the very thing that keeps you alive.

I have seen to many part time soldiers get hurt because they didn’t have the understanding of the tools of the mission!

A Soldier of The Cross’s tools:

Hebrews 4:12  For the word of God is quick, and powerful, and sharper than any twoedged sword, piercing even to the dividing asunder of soul and spirit, and of the joints and marrow, and is a discerner of the thoughts and intents of the heart.

2 Corinthians 6:7  By the word of truth, by the power of God, by the armour of righteousness on the right hand and on the left,

Matthew 8:5 And when Jesus was entered into Capernaum, there came unto him a centurion, beseeching him,

6 And saying, Lord, my servant lieth at home sick of the palsy, grievously tormented.

7 And Jesus saith unto him, I will come and heal him.

8 The centurion answered and said, Lord, I am not worthy that thou shouldest come under my roof: but speak the word only, and my servant shall be healed.

9 For I am a man under authority, having soldiers under me: and I say to this man, Go, and he goeth; and to another, Come, and he cometh; and to my servant, Do this, and he doeth it.

10 When Jesus heard it, he marvelled, and said to them that followed, Verily I say unto you, I have not found so great faith, no, not in Israel.

Fight the good fight – the cause

1 Timothy 6:11 But thou, O man of God, flee these things; and follow after righteousness, godliness, faith, love, patience, meekness.

12 Fight the good fight of faith, lay hold on eternal life, whereunto thou art also called, and hast professed a good profession before many witnesses.

Know that you don’t fight alone

Philemon 1:2 And to our beloved Apphia, and Archippus our fellowsoldier, and to the church in thy house:

3 Grace to you, and peace, from God our Father and the Lord Jesus Christ.