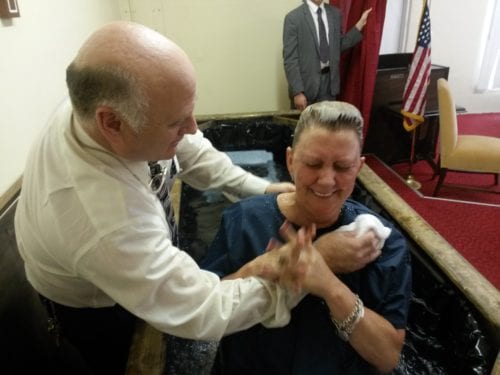 In order to understand Baptism properly and doctrinally we need to see how the scriptures lays out the case for Baptism.

Acts 8:26 And the angel of the Lord spake unto Philip, saying, Arise, and go toward the south unto the way that goeth down from Jerusalem unto Gaza, which is desert.

27 And he arose and went: and, behold, a man of Ethiopia, an eunuch of great authority under Candace queen of the Ethiopians, who had the charge of all her treasure, and had come to Jerusalem for to worship,

28 Was returning, and sitting in his chariot read Esaias the prophet.

29 Then the Spirit said unto Philip, Go near, and join thyself to this chariot.

30 And Philip ran thither to him, and heard him read the prophet Esaias, and said, Understandest thou what thou readest?

31 And he said, How can I, except some man should guide me? And he desired Philip that he would come up and sit with him.

32 The place of the scripture which he read was this, He was led as a sheep to the slaughter; and like a lamb dumb before his shearer, so opened he not his mouth:

33 In his humiliation his judgment was taken away: and who shall declare his generation? for his life is taken from the earth.

34 And the eunuch answered Philip, and said, I pray thee, of whom speaketh the prophet this? of himself, or of some other man?

35 Then Philip opened his mouth, and began at the same scripture, and preached unto him Jesus.

36 And as they went on their way, they came unto a certain water: and the eunuch said, See, here is water; what doth hinder me to be baptized?

37 And Philip said, If thou believest with all thine heart, thou mayest. And he answered and said, I believe that Jesus Christ is the Son of God.

38 And he commanded the chariot to stand still: and they went down both into the water, both Philip and the eunuch; and he baptized him.

39 And when they were come up out of the water, the Spirit of the Lord caught away Philip, that the eunuch saw him no more: and he went on his way rejoicing.

What does Baptism represent?

We learn that as part of the Gospel that:

1 Corinthians 15:3 For I delivered unto you first of all that which I also received, how that Christ died for our sins according to the scriptures;

4 And that he was buried, and that he rose again the third day according to the scriptures:

Romans 6:4  Therefore we are buried with him by baptism into death: that like as Christ was raised up from the dead by the glory of the Father, even so we also should walk in newness of life.

Ephesians 4:4 There is one body, and one Spirit, even as ye are called in one hope of your calling;

5 One Lord, one faith, one baptism,

6 One God and Father of all, who is above all, and through all, and in you all.

Acts 2:41  Then they that gladly received his word were baptized: and the same day there were added unto them about three thousand souls.